In her essay, “The Transformation of Silence into Language and Action,” Lorde writes, “When we speak we are afraid our words will not be heard or welcomed. But when we are silent, we are still afraid. So it is better to speak.”

Almost a year ago, my best friend was institutionalized for a manic episode. She was placed in a mental hospital. While in this institution, she was sexually assaulted by some of the other older, male patients there.

Rape cases in places where people are seen as “crazy” or who are “in treatment” are often ignored by the media and by the institution itself. My friend said that she reported her rape to the director of the program she was in. The white, male head of the program said, “I’m so sorry about what happened to you, we promise we will look into it.” But he didn’t investigate the rape at all. He didn’t ask her who did it or what happened. He never followed through with his promise. That was the end of it.

There have been no major movements to end or to bring awareness to the sexual assault that happens within mental institutions, to my knowledge. We have been socialized to not care about what happens behind these private walls. That is because these victims are often disregarded as “crazy,” so their story isn’t taken seriously. Because of the nature of where they are, they are extremely susceptible to being raped. Who is going to believe a person who is admitted to a hospital for mental illness?

These cases are not just confined to the hospital my friend was at. Rape and abuse of patients happens nationally and internationally, but yet we barely hear anything about them. Mental institutions across the world have been called “playgrounds for sexual predators.”

In a place that was supposed to be healing her, was actually just making things worse. With no action taken by the institution, she was left to internalize and eventually bury what happened to her. It wasn’t until the night Trump got elected when tension was high, that she told me that she had been raped. After she told me, she quickly put her hands over her mouth as if she had just revealed something that she wasn’t supposed to.

Why didn’t my best friend tell me she was raped before? It was because she thought who is going to care, let alone believe me?

Why didn’t my best friend tell me she was raped? It was because she feared the long lasting implications that it held for her future jobs and education.

Why didn’t my best friend tell me she was raped? It was because she was scared of what people might think of her.

Why didn’t my best friend tell me she was raped? It was because keeping silent was easier. 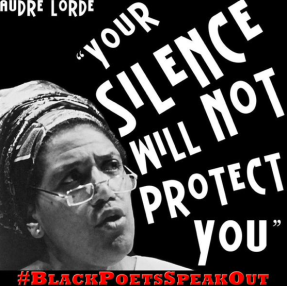 addens me and makes me want to bring Audre Lorde‘s vision about breaking silences to the foreground. Another rape survivor, Aishah Shahidah Simmons, also uses Lorde’s words as a way to help break silences. In an article that Simmons wrote that we read in my high school feminism class, “Audre Lorde’s Indelible Imprint on My Life,” she writes, “my silence will not protect me and that silence is not golden.”

A big shift in the way we talk and react to rape is needed. When talking to my friend, she said one reason she didn’t come forward was because, “In the past few years there have been so many rape cases with no repercussions for the rapist that it is hard to remain hopeful. I don’t want to go through it all again.” The laws that are trying to keep us safe are the ones that are silencing us. The fear of a failed trial kept yet another victim silent.

My friend didn’t come forward because of fear. She embodied what Lorde said in her  essay,“The Transformation of Silence into Language and Action”:

“In the cause of silence, each of us draws the face of her own fear – fear of contempt, of censure, or some judgment, or recognition, of challenge, of annihilation. But most of all, I think, we fear the visibility without which we cannot truly live.”

We need to find ways to combat the silence that permeates rape culture. We need to take action and to reform the law systems that are forcing people to remain stagnant in their silence. We need to have the tough conversations to expose rape as the heinous crime that it is. We need to become fearless about breaking our silences. And we need to do this by sharing personal experiences.

We can do this by making sure all schools have a mandatory class on sexual harassment, abuse, and rape. Everyone needs to read Lorde’s “The Transformation of Silence into Language and Action” and watch NO! The Rape Documentary by Aishah Shahidah Simmons.

We need to educate our children around Lorde’s vision that “your silence will not protect you.” We need to change the idea that a “victim mentality” means silence or weakness. Just because you are a victim, doesn’t mean that you are not strong, and because you were silenced once, doesn’t mean you should remain silent. We need to become fearless.

Lorde says, “I am not only a casualty, I am also a warrior.” I wish my friend would break her silences, and see herself as a warrior too.