As I was doing research to find out the angle I wanted to start my blog post with, I stumbled upon a post by Paul Betts that clear about what dinner parties were really. “What makes the difference at a dinner party are the host in the guests.” This made think about what Judy Chicago was trying to do with her piece. Paul Betts talks about how he was invited to a dinner party and never realized whom he was seating next to. This made me wonder how is was possible for someone to pay so little attention to his surrounding. It was not until later that I realized that the dinner was centralized on the food and the music rather than the host or whatever the dinner party was intended for. The host had turned “the dinner party into a fine art.” 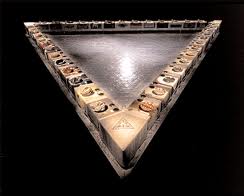 Judy Chicago’s Dinner Party is a piece of art, but Chicago does not only put an emphasis on the artistic side. All dinner parties have a purpose and you always come out learning more than you knew. This is exactly what Chicago does. She took the time to fix the table in a way that women at the table would be able to have a conversion with their neighbors and not get lost in the food.

It seems that I understand better why there were not as many black women activists that there could have been at that table. Even though Sojourner Truth and Sacajawea were not the only activist women of color, Judy Chicago had to work around those who had a common point. We all know that the injustice black women were experiencing was far more complicated than white women’ injustice. Rare were the times that black and white women allied to fight against their living situation. In “A History of Feminisms,” Frances Gage says after listening to Sojourner Truth speech at the Akron conference, “The magical influence that subdued the snobbish spirit of the day and turned the sneers and jeers of an excited crowd into notes of respect and admiration.”

Rare were the times that blacks were acknowledge and seen as humans in the eyes of whites. I think that Judy Chicago was going on that same analogy. She imagined that if this dinner party were to physically take place, who would be best seated next to whom. And she started thinking about who shared views or fought for the same rights. Whites women were fighting to be equal to men, however, black women fought for more. They fought to be seen as women, humans and then to be accepted. The white women’ struggles did not always converge with those of black women. So Judy Chicago did not try to go somewhere were she could get stuck or unable to get out of her mess, so she preferred making boundaries.

I do not think that the main question about this piece should be about why there are not as many women of color at the table. I think it should be about why Judy Chicago decided to make that piece. I do not know what Chicago had previously answered, mainly because I did not want to know the real answer. Art is unlimited and I think that if I find out one of the previous answers, I will be stuck on that answer.

Alone I have arrive to the conclusion the Judy Chicago’s idea of the Dinner Party was going alone with Virginia Woolf’s idea that “a woman must have money and a room of her own if she is going to write” (“A Room of One’s Own, Virginia Woolf). I think that Chicago took the meaning of “room of one’s own” as a place that does not have men. In that way, women can think and express themselves freely without being afraid of holding back. They are no longer restricted to the norms of society, which is probably why Chicago decided to represent these women with vaginas. It is the part of the most covered and protected part of the female body and a lot of time considered as a treasure, or something delicate. Chicago plays a little with the meaning of a vagina and who women are really in their “room”, when they are left alone to think and express themselves.

She also touched upon the androgynous mind, which Woolf wants us all to have. In “A Room of One’s Own,” Woolf talks about how the men seem to have better food than women during dinner time. “Why did men drink wine and women water?” Chicago makes Woolf’s dream come into reality. Not only is Virginia Woolf’s plate accompanied with a goblet that she can pour as much wine as she wants in, but her fellow feminist also have a goblet. In this dinner party, no one is dominating another, they are all equal, which is also showed by not having a head table.

Judy Chicago might have been criticized for this artwork, but it is only because the world was not ready to see women being who they are. Women in all of their color, telling their story and not what they were told to tell.

4 thoughts on “Judy Chicago was starting a movement.”