“But, you may say, we asked you to speak about women and fiction — what has that got to do with a room of one’s own?  I will try to explain.”  ~ Virginia Woolf.

These were the opening words to Virginia Woolf’s speech entitled A Room of One’s Own. Although Woolf delivered the speech in 1928, its theories are quite relevant to today.  Throughout her speech, Woolf stresses the point that women need 500 pounds a year for the rest of their lives and a room of their own in order to become a writer.  By this I believe that she meant that a woman must be independent to become a writer; she must have her own money to spend and her own room to write in.

Woolf says that with a “Room of One’s Own,” a writer will thrive.  It is not, however, simply a room to call your own.  I have my own bedroom, but that doesn’t keep my mom from storming in and telling me to wash the dishes or clean my room while I’m in the middle of writing a paper.  Maybe if I had a lock on my door and some Beats by Dr Dre to drown out the noise, or better yet, if I lived by myself, “a room of one’s own” would serve its purpose.

For example, when you are doing a calculation in your head and someone shouts out a random number, you lose your train of thought and sometimes you may never have that thought again.  Having a private room means being free from distractions.

The biggest distraction, Woolf describes, is family.  Women are made to be the “heroes” of the family. 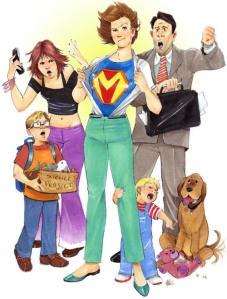 One of my friends posted a quote on her Facebook, it read: “My mom carried me in her womb for [nine] months… Then she became my nurse, my chef, my maid, my chauffeur, my biggest fan, my teacher, & my best friend.”  I take for granted the things that my mom does for me, and I’m sure a lot of other people do as well.

In the chapter titled “Feminism’s Legacy,” from the book, A History Of U.S. Feminisms, it says that women wish to “liberate themselves from the demand [to] “do it all.””  Because the baby is crying, her husband can’t find his car keys, her son wants to show her his science project, and her daughter needs help doing her hair, she has no time to herself and certainly no time to write; it is impossible for any woman to take the time to write when she has children and a husband to take care of.

In A History of U.S. Feminisms, Rory Dicker says, “since girls didn’t come into the world knowing how to cook, iron, sew, do laundry, or take care of children… they could be taught different behaviors and traits and develop different aspirations.”  Women do not automatically become “heroes,” but, bell hooks says, they develop these ideas through the influence of “sexist thinking… [that has been] socialized by parents and society.”  Because sexist roles are introduced during childhood, bell hooks believes that “children’s literature is one of the most crucial sites for feminist education.”

When family isn’t a distraction, money becomes a distraction, because you can spend as much time as you want in “your room,” but you may not have the money to keep the lights on.  Which comes to Woolf’s next argument that a writer needs money.  Today, feminist bloggers receive little to no income.  Courtney E. Martin addressed in her Nation article that blogs like Feministing receive the majority of their revenue from “third-party advertising, like Google AdWords… but most often there is no money left over – after tech and hosting fees- to pay [their] eleven bloggers.”  This means that the bloggers at Feministing must have a second job in order to take care of themselves financially, this also means that they can’t put as much effort into blogging because they must first worry about paying the rent and eating.

In A History if U.S. Feminisms, Dicker tells the story of a feminist by the name of Elizabeth Cady Stanton.  Soon after Stanton started making some real strides towards sex equality, her father went bankrupt, “she was [then] forced to leave school and seek employment as a teenager, a job at which she worked for more than ten years.”  Because her father went bankrupt, she could no longer focus on her activism, now she had to worry about making a living.  As Stanton grew older, a husband and children distracted her.

Because of money, Martin says, [feminist activism] has “become the third shift.  You do your activist work, then you have a job to make money and then you blog on top of that.”

the great art of making money and had left their money … to found fellowships and lectureships and prizes and scholarships appropriated to the use of their own sex.”

Woolf says that with money and a room of one’s own, a writer can strive.  Without money, however, it is impossible for her to have her own room, so I think what women really needed back then and today is money.  Women throughout our history haven’t typically been wealthy because we have been limited to low paying jobs, in order to become wealthy, we must step outside the boxes we have been confined to. In order for women to be good writers, they must have freedom, freedom from worrying about money and freedom to spend their time as they wish.

5 thoughts on “Money Runs the World, But Who has the Money?”